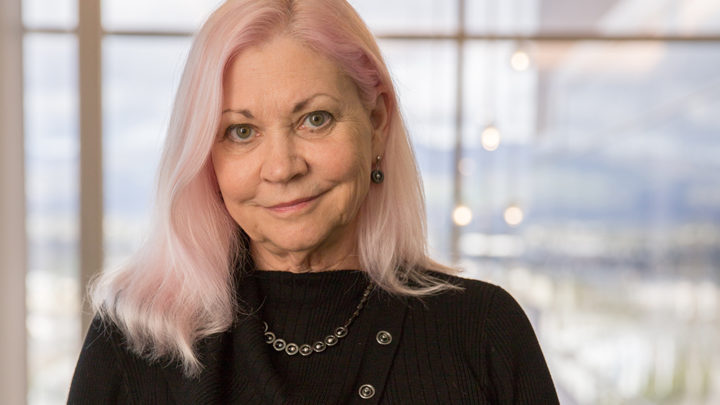 I’ll never forget the first time I was in a meeting with Therese Tucker. She brings a perfectly balanced combination of passion, intellect, laser sharp insight, humility, receptiveness, and kindness into the room, and has a way of making every single person feel important.

As BlackLine’s founder and CEO, she’s the kind of leader that naturally inspires—not only because she has successfully built her own company in the tech space and taken it public, but because of who she is.

Her journey has been so successful and inspiring because of her determination, resilience, and strength in the face of waves of adversity. And she’s had plenty of adversity.

Discovering the Power of Programming

The road to BlackLine began in college, when she took one of the first ever programming courses, from Apple. Like most college freshman, she had a few false starts as she found her path, majoring in business and French and then considering a switch to art.

During that class she found her passion in programming, and changed her major to computer science and math. While this switch may seem tangential, Therese’s interests have always been linked to business and programming, and opened new opportunities for what business could accomplish.

She says, “The beautiful thing about programming is that you can direct a computer to do something for you and you can then run that on a million computers. The power is amazing for what you can do for business with that. I fell in love with it, and it’s been my entire career.”

Therese founded BlackLine in 2001. She designed the first offerings of BlackLine’s products, engineered its transition to the cloud in 2007, and in 2017, became the first woman founder/CEO to take a venture-capital-backed Los Angeles startup public.

But the road to success certainly hasn’t been easy.

She has overcome significant challenges along the way, and has some invaluable advice for women who want to forge their own path in the tech industry.

“Any journey’s tough,” says Therese, “but I would say, definitely in the tech industry. It is very male dominated and that’s true starting in university. I’d be in classes where there might be one other woman in a class of 500. That has been [the case] throughout my career.

Always one to appreciate the larger perspective, Therese considers how this impacted her throughout her career: “I believe [this] has both a good and bad side. You stand out. If you’re the only woman in the room, you absolutely get noticed. You do have to have a bit of a thick skin so that certain things don’t bother you.”

This thick skin served her well in the early days of BlackLine.

She started the company with more than 25 years of financial accounting and technology development experience under her belt, but quickly discovered that there was little opportunity for any kind of funding.

Unfortunately, her struggle to find funding was not, and is not, unusual for a female-founded or even female-led company. According to a report from Dow Jones VentureSource from 2012, a few years after Therese initially sought funding, only 1.3% of venture-backed startups have a female founder and 6.5% of venture-backed startups have a female CEO.

Undeterred by the funding struggle, Therese bootstrapped her company herself, taking a second mortgage out on her home, liquidating her retirement, risking everything – including the friendships with those from whom she borrowed funding.

This led to many sleepless nights, and she credits her adaptability and unwavering confidence for getting her through —along with her gender. “Women are, in general, incredibly adaptable,” she says. “And they find ways. I found a way.”

Her mentality embodies the spirit the Dow Jones VentureSource report tried to capture when it reported that “having more female executives makes a significant difference in pushing a company to success.”

The tech world is primarily made up of men, who fill approximately 74% of all tech jobs, leaving the door wide open for women to fill that void – and this is absolutely a void that needs to be filled. Women overcome different challenges in their professional careers, enabling them to bring unique skillsets to the workplace that creates competitive advantage for all companies, but especially for tech.

Therese is proud of the number of women in highly technical roles at BlackLine, and would love to see more women pursuing careers in the industry. She says, “Women can be extraordinarily collaborative. They’re really good at getting everybody working together and getting the best out of a group of people. That’s such a strength, especially when it’s applied to technology.”

And for each entrepreneurial woman, here is her invaluable advice: “Find mentors. I have had several incredibly wonderful mentors who have taught me so much about business, who have helped prevent me from making some terrible mistakes. Find mentors who can help you.”

Women in tech all have a unique story to tell. Read Raquel Renteria’s story next.