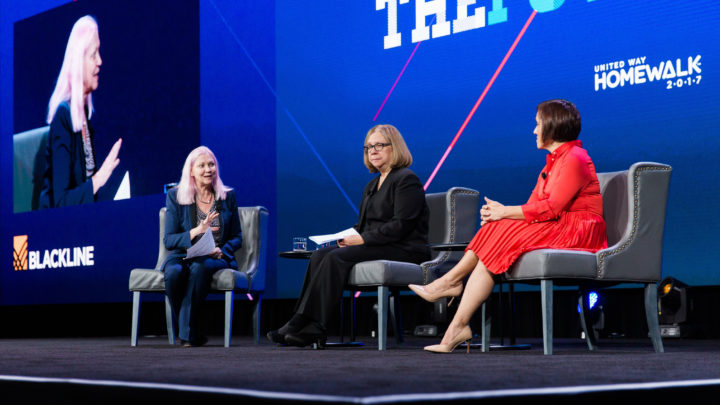 “Being filled with gratitude makes for a much happier life,” says BlackLine Founder and CEO Therese Tucker. “Everyone in this room has enough to eat, has a roof over their head, health insurance―more than enough in every area. And yet sometimes we start focusing on things that are really small in the overall perspective.”

“There are people on the fringes who are not well taken care of. And it’s our responsibility to give back,” she says.

For this reason, BlackLine customers, partners, and employees come together during InTheBlack each year to volunteer within the community.

In Part One of this blog series, learn about the reality of homelessness in Los Angeles, and some ways the epidemic is being addressed.

Therese: Can you talk about the homelessness issue in Los Angeles?

Ann Sewill: I grew up in Northern California in the late sixties and early seventies, and homelessness as we know it now did not exist. I say that because it's important to realize this is not a forever problem.

Over time, it’s become a greater and greater problem, made up of a number of different issues.  For example, there's what we call “chronically homeless”—when people are on the street for a really long time and have struggles with mental illness and substance abuse.

But more and more in LA, we're seeing people who are facing homelessness because of economic disasters. They lost hours at work, or they lost their job. In the past, that created a housing cycle. They would couch surf with friends or sleep in somebody's garage, and eventually be able to come back into the housing market.

Therese: But it’s much more difficult to do that now.

Ann Sewill: Right. One of the things we say all the time is that our housing crisis is driving our homeless crisis, because people can't come out of homelessness as easily.

I went to an event with Ana a couple of years back, and the homeless gentleman who was speaking there had lost his home after spending everything on cancer treatments, trying to save his wife's life.

Not only did he lose his wife, but he ended up becoming homeless because he used up all of his assets. Once he got into that cycle, it was extraordinarily difficult for him to break it.

Ana Guerrero: Another kind of homelessness is more invisible: the homeless people who may work in the Starbucks where you get your coffee, or even some of your offices, but live far outside of LA where they can afford it. And Sunday through Thursday night, they sleep in their car.

This year we saw an uptick of 10,000 first-time homeless people, many of whom are working. Those folks don't need permanent supportive housing as much—they need affordable housing.

Therese: Can you speak to some of the initiatives that are going on in LA right now?

Ann Sewill: Last year, Mayor Eric Garcetti led a campaign to pass Measure M, a tax that will allow us to complete building a public transportation system that will create over 460,000 jobs and reduce traffic.

We also passed Measure H, which will generate more than $50,000,000 per year to pay for services for the homeless, and Measure HHH, which will allow us to build permanent supportive housing.

Therese: Ana, can you speak to some of the things that CCF is doing in conjunction with the mayor's office?

Ana Guerrero: Especially in a market like LA, some people are probably never going to earn enough to compete in the rental market.

They need help to afford housing, but they also need additional services to stay housed. Permanent supportive housing with intensive case management services has a 92% success rate in getting people off the street and keeping them housed. And that's what Measure HH is really trying to do.

Giving Is at the Heart of BlackLine

Becoming more educated about topics like homelessness is important, but it doesn’t end there. It’s imperative that we also act and do our part to create change.

The BlackLine Community takes this responsibility seriously, and we put our values into action every year at InTheBlack. Our annual Giving Back Day concludes the four-day conference, and provides attendees with an opportunity to make a difference by partnering with local charities. This year in Las Vegas, Habitat for Humanity will host our volunteering experience as we help build a home for a local family.

Join us from November 12-15 to experience InTheBlack and participate in our annual Giving Back Day. It’s the perfect way to end a transformative conference, remind us of what’s most important, and foster a true sense of gratitude.