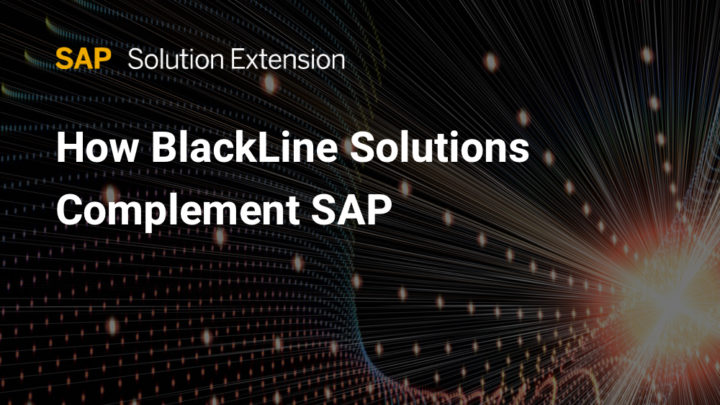 It’s well known that SAP S/4HANA represents a major improvement in ERP performance and innovation. And it’s clear that SAP customers are making the move.

According to the America’s SAP Users’ Group (ASUG)’s pulse of the customer survey, 100% of SAP customers are either actively moving or planning to move to SAP S/4HANA.

While preparing to make this move, SAP customers often seek strategic guidance from SAP or other advisors on ways to do so while minimizing risk, ensuring the best business outcomes, and maximizing ROI. One way accounting and finance teams can achieve a major boost is by leveraging SAP’s Solution Extensions by BlackLine.

“BlackLine’s SAP solution extensions augment SAP S/4HANA before and after go-live, but they also enhance customer confidence by providing a consistent, single-source accounting interface during transition.

“BlackLine enhances visibility and control and automates manual work to reduce risk. Users can maintain a link between their historical data and reconciliations and their future state SAP S/4HANA structures by using BlackLine’s cloud solutions,” she says.

“So, while aspects of the migration can feel disruptive, when it comes to the financial close, it almost feels to the user that nothing has changed.”

BlackLine supports the SAP migration in a number of ways. For one, BlackLine applies its transaction-matching functionality to the task of clearing open items.

Open item managed accounts frequently have balances made up of thousands of individual debit and credit transactions that have not yet been matched and cleared, often because of the level of effort and manual process required to do so.

The items may not be material individually, but are often significant in the aggregate and can quickly build in volume to the point where they’re slowing down performance of the ERP. Leading practice is to clear open items, particularly aged items, before moving to SAP S/4HANA, to avoid unexpected write-offs, control issues, and manual clearing after cutover.

BlackLine’s matching functionality reconciles the items, posts a clearing document to SAP, and reports on unreconciled items automatically, greatly reducing the time, effort, and risk of manual clearing, and helping to reduce the complexity of the SAP S/4HANA move.

According to Michael Gilmartin, vice president of BlackLine’s SAP Center of Excellence, “In one example, BlackLine functionality is saving a Fortune 50 SAP customer 1200 hours a month by clearing open items.”

Among other advances, SAP S/4HANA is giving businesses an opportunity to make changes to their finance structures to take advantage of a simplified architecture. BlackLine helps by mapping the changes to the historical finance master data, which includes the chart of accounts, entity structures, and other fields, to the new ledger design.

A major insurance company, Zurich North America, capitalized on its use of BlackLine functionality to prepare for the adoption of IFRS17 and ensure a smooth transition to SAP S/4HANA. BlackLine’s ability to map the company’s financial master data helped Zurich make the transition in two years, on budget and on time, according to Boyle.

“At the same time, Zurich absorbed a 160% increase in the number of reconciliations, and didn’t have to add headcount,” she says. “They’ve also achieved a 98% auto-certification rate in their parallel ledger accounts.”

By automating the manual workload that often consumes Accounting at month-end, BlackLine frees valuable internal resources to serve as subject matter experts and strategic advisors—both during an SAP S/4HANA initiative and beyond.

“Most IT leaders say that they don’t have sufficient in-house expertise to successfully migrate to SAP S/4HANA,” Boyle says. “The goal of accounting automation is to reduce manual spreadsheet processes and other administrative tasks that tie up experts and free up those A&F resources to spend more time on analysis and strategic initiatives.

“When it comes to an enterprise-wide transformation, BlackLine’s capabilities make it possible to loan accounting and finance professionals to properly support an IT-driven initiative.”

Helping with ERP migration is one of many reasons for BlackLine’s expanding presence among SAP customers.

“Many SAP S/4HANA projects have been slowed or halted by the current disruption,” says Boyle. “Yet many accounting and finance teams are still moving forward with financial close automation.

“Because solutions like BlackLine enable better collaboration and can be deployed remotely and swiftly, accounting teams are able to get ROI now and still prepare for later transformation and SAP S/4HANA moves.”

Read BlackLine Quarterly for more stories like this, including: